I usually focus on an individual in my monthly Everyday Hero blog. But this month, I decided to highlight the 58,267 Americans whose names are on the Vietnam Memorial. The Wall. I found the following statistics on the Internet and decided to share them with the followers of this blog. I suspect that most Americans remember that over 50,000 Americans died in the Vietnam War. But that's about all they remember, except, perhaps, that social unrest and demonstrations occurred during that period. However, when you read the information below, I hope you realize the sacrfifices made by so many of our countrymen and women.

Did you know that one out of every 10 Americans who served in Vietnam was a casualty. 58,267 were killed and over 304,000 wounded, out of 2.7 million who served. 75,000 Vietnam veterans are severely disabled.
The names on the Vietnam Memorial are arranged in the order in which they died by date
and within each date the names are alphabetized. It's difficult to believe it is
36 years since the last casualties.
The first known casualty was Richard B. Fitzgibbon, of North Weymouth ,
Massachusetts. Listed by the U.S. Department of Defense as having been killed on June
8, 1956. His name is listed on the Wall with that of his son, Marine Corps
Lance Cpl. Richard B. Fitzgibbon III, who was killed on Sept. 7, 1965.

There are three sets of fathers and sons on the Wall.

5 soldiers on the Wall were 16 years old.

997 soldiers were killed on their first day in Vietnam ..

1,448 soldiers were killed on their last day in Vietnam ..

31 sets of brothers are on the Wall.

Thirty one sets of parents lost two of their sons.

8 Women are on the Wall.

244 soldiers were awarded the Medal of Honor during the Vietnam War; 153 of
them are on the Wall.

Beallsville, Ohio with a population of 475 lost 6 of her sons.

West Virginia had the highest casualty rate per capita in the nation. There
are 711 West Virginians on the Wall.

The Marines of Morenci - They led some of the scrappiest high school
football and basketball teams that the little Arizona copper town of Morenci
(pop. 5,058) had ever known and cheered. They enjoyed roaring beer busts. In
quieter moments, they rode horses along the Coronado Trail, stalked deer in
the Apache National Forest . And in the patriotic camaraderie typical of
Morenci's mining families, the nine graduates of Morenci High enlisted as a
group in the Marine Corps. Their service began on Independence Day, 1966.
Only 3 returned home.

The Buddies of Midvale - LeRoy Tafoya, Jimmy Martinez, Tom Gonzales were all
boyhood friends and lived on three consecutive streets in Midvale, Utah on
Fifth, Sixth and Seventh avenues. They lived only a few yards apart. They
played ball at the adjacent sandlot ball field. And they all went to Vietnam
. In a span of 16 dark days in late 1967, all three would be killed. LeRoy
was killed on Wednesday, Nov. 22, the fourth anniversary of John F.
Kennedy's assassination. Jimmy died less than 24 hours later on Thanksgiving
Day. Tom was shot dead assaulting the enemy on Dec. 7, Pearl Harbor
Remembrance Day.

The most casualty deaths for a single month was May 1968 - 2,415 casualties
were incurred.

Many Americans who read this  will only see the numbers that the
Vietnam War created. To those who survived the war, and to the
families of those who did not, we see the faces, we feel the pain that these
numbers created. We are, until we too pass away, haunted with these numbers,
because they were our friends, fathers, husbands, wives, sons and daughters.
You don't have to be a Vietnam Vet or a family member of someone who was killed or wounded to honor the ultimate sacrifice that so many people made. You can honor those who served and sacrificed by thanking a vet.
There are no noble wars, just noble warriors. 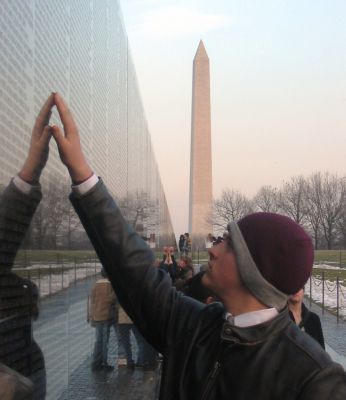