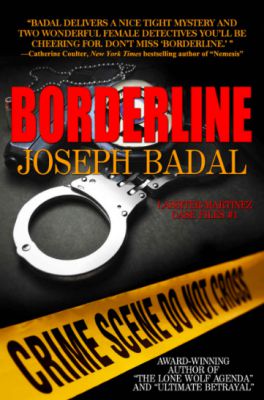 In “Borderline,” Joseph Badal delivers his first mystery novel with the same punch and non-stop action found in his acclaimed thrillers.

Barbara Lassiter and Susan Martinez, two New Mexico homicide detectives, are assigned to investigate the murder of a wealthy Albuquerque socialite. They soon discover that the victim, a narcissistic borderline personality, played a lifetime game of destroying people’s lives. As a result, the list of suspects in her murder is extensive.

The detectives find themselves enmeshed in a helix of possible perpetrators with opportunity, means, and motive—and soon question giving their best efforts to solve the case the more they learn about the victim’s hideous past.

Their job gets tougher when the victim’s psychiatrist is murdered and DVDs turn up that show the doctor had serial sexual relationships with a large number of his female patients, including the murder victim.

“Borderline” presents a fascinating cast of characters, including two heroic female detective-protagonists and a diabolical villain; a roller coaster ride of suspense; and an ending that will surprise and shock the reader.

“‘Borderline’ grabs the reader early and never lets up. Opening with the discovery of the murder victim, a wealthy horsewoman full of sexual energy, gorgeous—and universally hated—the mystery progresses to an amazing revelation. Author Joseph Badal fills the pages with solid police work, a handsome private eye, an out-of control teenager and secret X-rated videos. In the hands of this fine writer, the story carried me along every step of the way.”
--Anne Hillerman, Author of the New York Times bestsellers “Spider Woman’s Daughter” and “Rock with Wings

"Think Cagney and Lacey. Think Thelma and Louise. Think murder and Mayhem--and you are in the death grip of a mystery that won't let you go until it has choked the last breath of suspense from you."
--Parris Afton Bonds, Author of "Tamed the Wildest Heart"