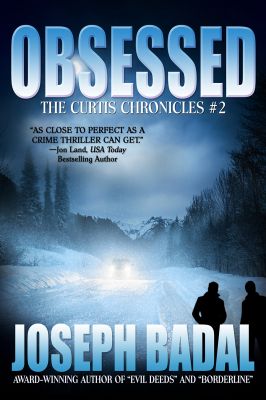 A world-class thriller with non-stop, heart-pounding tension and action, “Obsessed” brings back Matt Curtis and Renee Drummond and their villainous nemesis, Lonnie Jackson. This second installment in Joseph Badal’s The Curtis Chronicles takes the reader from Rio de Janeiro to the mountains of New Mexico to the Mexico/United States border, following a crazed Jackson on his single-minded quest for revenge against the two people he blames for the deaths of his mother and brother and for the destruction of his criminal empire in Hawaii.

“Obsessed” is another master stroke of fiction from this Amazon #1 Best-Selling Author, two-time winner of the Tony Hillerman Award for Best Fiction Book of the Year, and three-time Military Writers Society of America Gold Medal Winner.

If you like fast-paced stories that put you on a breathless, adrenaline-filled journey, with realistic good guys and believable bad guys, “Obsessed” will have you begging for more.