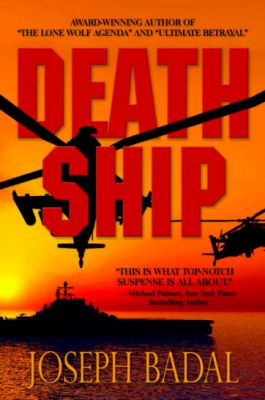 Death Ship is the fifth book in the Danforth Saga, which includes Evil Deeds, Terror Cell, The Nostradamus Secret, and The Lone Wolf Agenda. This latest edition of the Danforth story introduces Robbie Danforth, the 15-year-old grandson of Bob and Liz Danforth. Bob and Liz are now retired and Robbie’s father, Michael, is a senior officer with DELTA Command.

The story begins in Fayetteville, North Carolina, where Robbie is a high school student and, as the spring semester ends, is being bullied by a sadistic gang of older boys.

Bob and Liz charter a private yacht in the Ionian port of Siracusa, Sicily and invite Robbie and his mother, Miriana, to join them. The ability to leave North Carolina provides relief for Robbie from the daily bullying. On the day before they board the yacht, it is hijacked by a three-man team that plans, along with two other teams on hijacked boats, to attack U.S. Navy ships at Sigonella Naval Base on the northeast coast of Sicily. The team on the Danforth yacht plans to murder the family and the craft’s owner during its first day at sea.

Bob senses that something is amiss with the crew, but before he can act, Robbie shoots and kills with a flare gun the team leader of the hijackers when the man threatens his mother and grandmother. Bob and the boat’s owner subdue or kill the remaining two hijackers.

Evidence left behind by the hijackers indicates that they may be Iranians on a terrorist mission. After Bob alerts the CIA about the hijacking and about his suspicions, the Company discovers that there are two other hijacked boats that appear to be on course to rendezvous with a fishing boat carrying explosives to be offloaded onto the three hijacked boats.

Michael Danforth and a DELTA team on a classified mission in Afghanistan are flown to Sicily to assist in defeating the remaining hijackers. Meanwhile, the CIA enlists National Reconnaissance Office and National Security Agency assistance to try to determine the hijackers’ target.

It soon becomes clear that the hijackers’ mission is to attack Sigonella, but it also becomes clear that their mission makes no sense because there is no way that a craft loaded with explosives could get close enough to a U.S. Navy ship before it would be destroyed. Bob and members of the CIA’s Office of Clandestine Services come to the conclusion that the planned attack must be a diversion.

Intelligence product leads the CIA to believe that the real target is a U.S. Navy Aircraft carrier moored in Piraeus Bay, and that the weapon to be used against the carrier is a nuclear device planted on an oil tanker.  The CIA’s concern is not just for the men and women aboard the carrier, but also for the people in the region, and about the ecological disaster that would occur.

While the U.S. attempts to identify the oil tanker and confirm that it is carrying a nuclear weapon, an undercover CIA agent—an Iranian ex-patriot young woman—works inside a German investment firm to try to identify the firm’s clients. The firm has consistently and uncannily made investments that benefit from terrorist events, going all the way back to September 11, 2001. The Company believes that the firm and its clients are in league in planning terrorist events and capitalizing financially on those events.

These two threads of the story come together when the CIA discovers that the player behind the planned attack on the carrier and the investment firm’s investments is the Islamic State. IS has covered its plans and trail by using Iran as a stalking horse in the entire enterprise.

The oil tanker that is armed with the nuclear device is sailing under a false electronic signal, identifying it as a container ship. While the CIA tries to locate the tanker with satellites and electronic data, the ship enters Piraeus Bay under a false identifier. When the ship is finally identified, Michael, his DELTA team, and several Navy SEALs board the ship and discover a nuclear weapon and a nuclear engineer. They force the engineer to work with them to disarm the weapon with only seconds to spare before it is set to detonate.

An enemic, cowardly U.S. President influences the entire adventure with his inability to take action. His decisions, or lack thereof, are tainted by his hatred for Bob Danforth and for Jack Cole, the Director of Central Intelligence. The President's behavior during this crisis forces him to resign. His successor takes action against IS and the German investment firm, and approves medals for bravery to Michael and his men.

The book ends with Robbie back in North Carolina. The bullying that occurred in the previous semester begins anew. But Robbie has learned a great deal from being with his grandfather during the cruise, including the fact that using his mind can be, at times, more effective than physical force. He leads the gang of bullies to a church lot where they surround, beat, and rob him of a large amount of cash, all of which is filmed by a television news crew from a station that is televising a series on bullying. Not only is the news crew’s film evidence of the gang’s crimes, but the money they took off Robbie is marked with his name. The gang members are arrested on felony charges. Robbie becomes a popular member of the student body.

"Death Ship is the latest in the line of superb thrillers from masterstoryteller Joseph Badal, and is an outstanding addition to his best-sellingDanforth Saga. Death Ship delves deepinto the shady world of intelligence and terrorist threats, and the authorwrites with an authority which can only come from his personal involvement inclassified missions across the globe. The reader will soon be immersed in thisintense and chilling story of modern day terrorism that threatens the ancientheart of Western civilization, and destruction on an apocalyptic scale. If you haven't read Badal before, then you should start right now."
--Mark Leggatt, Author of Names of the Dead

Joseph Badal's DeathShip (Book 5 in the Danforth Saga) is a high-octane, high-stakesthriller with exquisite suspense and non-stop action thatwill push your heart rate to its limit. The tension in these pages isrelentless.
--Mark Rubinstein, Award-winning author of The Lovers'Tango

"DEATH SHIP is action-adventure at itsabsolute best; a thinking man's thriller that mixes in a hefty dose of heartand soul as well.  Joseph Badal's fifth and best book in his Danforth Sagamaintains the epic quality of the past titles while taking his craft to a levelon par with the likes of James Rollins, Steve Berry and Brad Thor.  Asbeautifully conceived as it is wondrously structured, DEATH SHIP featuresnail-biting suspense, even as it tugs at our heart strings and leaves us readyfor the next installment of the series.  Not to be missed!"
--Jon Land, USA Today bestselling author of Strong Light of Day