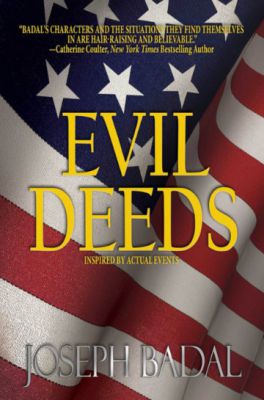 Evil Deeds is the first book in the Bob Danforth series, which includes Terror Cell, The Nostradamus Secret and The Lone Wolf Agenda. The reader can follow the lives of Bob and Liz Danforth and their son, Michael, from 1971 through 2011.

Evil Deeds begins on a sunny spring day in 1971 in a quiet Athenian suburb. Bob and Liz Danforth's morning begins just like every other morning: breakfast together, Bob roughhousing with Michael. Then Bob leaves for his U.S. Army unit and the nightmare begins. A criminal band abducts Michael and spirits him to Bulgaria.

So begins a twenty-eight-year journey that takes the Danforths from Michael's kidnapping and Bob and Liz's efforts to rescue him, to Bob's forced separation from the Army because of his unauthorized entry into Bulgaria, to his recruitment by the CIA, to Michael's commissioning in the Army, to Michael's capture by a Serb SPETSNAZ team in Macedonia, and to Michael's eventual marriage to the daughter of the gang leader who kidnapped him as a child.

The stops along the journey weave an intricate series of heart-stopping events built around complex, often diabolical characters. The reader experiences CIA espionage during the Balkans War, attempted assassinations in the United States, and the grisly exploits of a psychopathic killer.

Evil Deeds is an adrenaline-boosting story about revenge, love, and the triumph of good over evil.