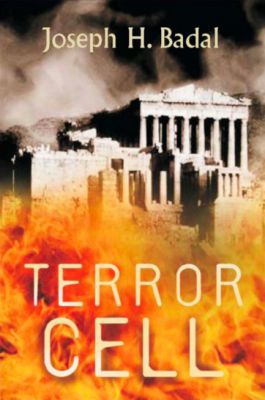 Bob Danforth, Chief of Special Operations at the CIA, is sent to Athens, Greece to track down a group of terrorists who murdered the CIA Station Chief.

Evidence surfaces which leads Danforth to believe the same terrorist group is planning a catastrophic attack during the Olympic Games.

He must unravel the terrorists' plot before it's too late.

"Joseph H. Badal returns with another gripping page turner set against the backdrop of the 2004 summer Olympics in Athens. Filled with compelling characters and inside military knowledge, Badal has written another timely story that is intriguing and terrifying. You won't be able to put it down."
Sheldon Siegel, New York Times Best Selling Author of FINAL VERDICT

"Joe Badal takes us into a tangled puzzle of intrigue and terrorism; a page-turning mystery that gives readers a chance to combine learning of Greece and Greek politics with a tense, well told tale."
Tony Hillerman, New York Times Best Selling Author

"As up-to-date as today's headlines, TERROR CELL throws the reader slam-bang into the middle of a deadly struggle between the CIA and terrorists hell-bent on disrupting the Athens Olympics. Joseph Badal takes international intrigue to a whole new level."
Steve Brewer, author of BULLETS

"This political terrorist thriller uses the backdrop of the Olympic games in Greece coupled with the middle eastern terrorist treat. Veteran CIA Special Ops Officer, Bob Danforth, and his wife are ready for him to climb out of the saddle and retire. The assassination of the Athens Station Chief brings him back into the field. Not only does he have to fight the terrorists, but a look-the-other-way Greek government that has been co-opted by the bad guys. To add to the tension is the looming Olympics contest.
The author adds his extensive knowledge of how the intel community works with the emotional conflict between an old war horse and his long suffering wife. This makes for believable tension as the protagonist is pulled this way and that by duty, common sense, obligations and love. We ranked this book five hearts."
Bob Spear - Publisher and Chief reviewer, Heartland Reviews,www.heartlandreviews.com