Jacklyn Harold "Jack" Lucas was born in Plymouth, North Carolina on February 14, 1928. After his father, a tobacco farmer, died when he was ten, his mother sent him to nearby Edwards Military Institute. Lucas was only 14 years of age when he enlisted in 1942 in the Marine Corps Reserve without his mother's consent. He gave his age as seventeen and forged his mother's name, and was sent to Marine Corps Recruit Depot Parris Island, South Carolina.

He was next assigned to the Marine Barracks at Naval Air Station Jacksonville, Florida. In June 1943, he was transferred to the 21st Replacement Battalion at Marine Corps Air Station New River, North Carolina, and one month later he went to the 25th Replacement Battalion, and successfully completed schooling at Camp Lejeune, North Carolina which qualified him as a heavy machine gun crewman. He was next sent by train to San Diego with his unit. He left the continental United States on November 4, 1943, and the following month joined the 6th Base Depot of the V Amphibious Corps at Pearl Harbor, Hawaii. On January 29, 1944, he was promoted to private first class.

On January 10, 1945, according to statements he made to his comrades, Lucas walked out of camp to join a combat organization wearing a khaki uniform and carrying his dungarees and field shoes in a roll under his arm. He was declared UA (UnauthorizedAbsence) when he failed to return that night and a month later he was reduced to the rank of private. He stowed away on board the USS Deuel which was transporting the 1st Battalion, 26th Marine Regiment of the 5th Marine Division to Iwo Jima. On February 8, the day before he would have been placed on the Marine Corps "deserter list", he turned himself in to Marine Captain Robert Dunlap, Commanding Officer of C Company. He was taken by Captain Dunlap to the battalion's commanding officer Lieutenant Colonel Daniel Pollock, and was assigned to Dunlap's rifle company as a rifleman. On February 14, Lucas reached his seventeenth birthday while at sea five days before the invasion of Iwo Jima began.

On February 19, Lucas made the 5th Division's landing on Iwo Jima with C Company, 1st Battalion, 26th Marines. On February 20, Lucas and three Marines who were members of a 4-man fire team from one of C Company's platoons were creeping through a twisting ravine towards an enemy airstrip when they spotted an enemy pillbox and got into a trench for cover. They then spotted eleven Japanese soldiers in a parallel trench and opened up on them with rifle fire. The Japanese also opened fire and threw two grenades inside the Marine's trench. Lucas spotted the grenades on the ground in front of his comrades and yelled "grenades", he then jumped over a Marine and dove toward the grenades, jamming one of them into the volcanic ash and soft sand with his rifle and covering it with his body while reaching out and pulling the other one beneath him. The first of the two grenades exploded, tossing Lucas on his back, severely wounding him in the right arm and wrist, right leg and thigh, and chest. He was still conscious and barely alive after the blast, holding in his left hand the other grenade, which did not explode. His three comrades were unharmed due to Lucas' actions, and the Japanese soldiers in their trench were all killed and the three Marines continued on away from the trench, leaving Lucas behind for dead.

Lucas was found by Marines from another unit passing by who called for a navy corpsman who attended to his wounds and protected him with a carbine from being shot and killed by another Japanese soldier in the trench. He was evacuated by stretcher-bearers to an LST and then to a cargo ship used as a hospital, and then to the hospital ship Samaritan. He was treated at various field hospitals prior to his arrival in San Francisco, California on March 28, 1945. He eventually underwent 21 surgeries. For the rest of his life, there remained about 200 pieces of metal, some the size of 22 caliber bullets, in Lucas' body. In August, the mark of desertion was removed from his record while he was a patient at the U.S. Naval Hospital at Charleston, South Carolina. On September 18, he was discharged from the Marine Corps Reserve because of disabilities resulting from his wounds.

On October 5, 1945, Lucas was presented the Congressional Medal of Honor by President Harry S. Truman during a ceremony on the South Lawn of the White House.

Just before I sat down to write this blog, I read a news article about a university that had established safe zones for students. A “safe space” was created for Brown University students. The space included cookies, coloring books, bubbles, Play-Doh, calming music, pillows, blankets, and a video of puppies. I can only imagine how Jack Lucas would have reacted had he been alive to read that same article. At 14 years of age, Lucas enlisted in the Marine Corps. At 17, he was in combat, gravely wounded, and presented the Congressional Medal of Honor. Here was a man who showed courage, character, and selflessness. He was an Everyday Hero. America’s “snowflakes” who are cuddled on college campuses today dishonor his memory. 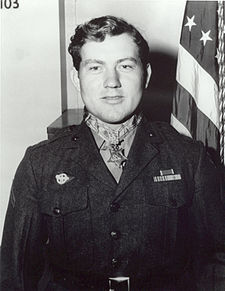 Joseph Badal is the author of 10 award-winning novels, including The Motive, which earned the Tony Hillerman Prize for Best Fiction Book in November 2016. His next novel, Dark Angel, will be released on January 24, 2017.